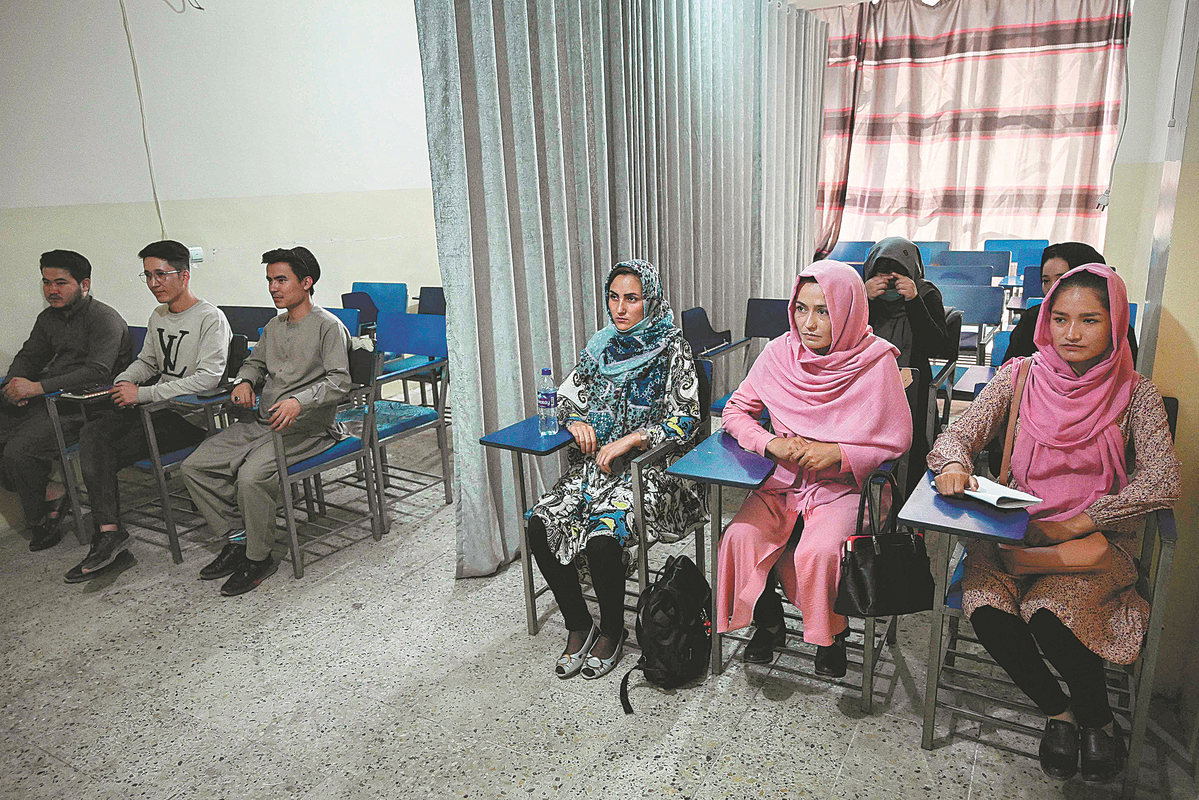 Afghan students attend a class bifurcated by a curtain separating males and females at a private university in Kabul on Tuesday. [AAMIR QURESHI/AGENCE FRANCE-PRESSE]

The United Nations on Tuesday appealed for almost $200 million in extra funding for lifesaving aid in Afghanistan, as the international community comes to terms with the new Taliban regime with a flurry of diplomacy.

The UN humanitarian agency OCHA said the extra sum meant a total of $606 million in aid was now needed for Afghanistan until the end of the year.

"Basic services in Afghanistan are collapsing and food and other lifesaving aid is about to run out," OCHA spokesman Jens Laerke said.

The agency voiced the hope that countries would pledge generously at the conference, saying the $606 million was needed to provide critical food and livelihood assistance to nearly 11 million people, and essential health services to 3.4 million.

The UN has warned 18 million people are facing a humanitarian disaster, and another 18 million could quickly join them.

The Taliban, too, have appealed to the international community to continue support for Afghanistan.

The heightened focus on funding support came after the Islamist fighters claimed total control over the country on Monday, saying they had won the key battle for the Panjshir Valley, the last remaining holdout of resistance against their rule.

In Panjshir, the Taliban published a video of their flag being raised over the governor's house－underscoring a historic win that has seen the anti-Taliban bastion defeated for the first time during 40 years of conflict.

Also on Monday, students across the war-torn nation have started returning to university for the first time since the Taliban stormed to power, and in some cases females have been separated from their male peers by curtains or boards down the middle of the classroom.

A senior Taliban official told Reuters that classroom dividers such as curtains were "completely acceptable", and that given Afghanistan's "limited resources and manpower "it was best to "have the same teacher teaching both sides of a class."

What happens in schools across the country is being closely watched by foreign powers, which want the Islamist movement to respect the rights of women in return for vital aid and diplomatic engagement.

US Secretary of State Antony Blinken and Defense Secretary Lloyd Austin opened talks on Tuesday in Qatar, as they try to speed up evacuations from Kabul.

Blinken told reporters that Taliban officials had told the United States that they would let people with travel documents depart freely.

Qatar, which hosts a major US military base, has been the gateway for 55,000 people airlifted out of Afghanistan, nearly half the total evacuated by US-led forces after the Taliban takeover.

The US on Monday facilitated the evacuation of four US citizens by land from Afghanistan, the first departures arranged by Washington since the military pullout.

A US State Department official said the Taliban were aware of the operation and did not interfere.

But nongovernmental organizations say that as many as 1,300 people－including US citizens－are stuck at the airport in the northern Afghan city of Mazar-i-Sharif. The delay was blamed by some activists on the US State Department, Reuters reported.

Asked whether the US would recognize the Taliban, US President Joe Biden told reporters on Monday: "That's a long way off."

Meanwhile, Turkey is working with Qatar and the US about operating Kabul airport and is in talks with the Taliban, said Turkish Foreign Minister Mevlut Cavusoglu on Tuesday, adding that there was also "no need to rush" in recognizing the Taliban's rule in Afghanistan.

Cavusoglu said the international community should take a wait-and-see approach before recognizing the Taliban's rule, sounding a similar tone to the one adopted by the European Union at a meeting on Friday.

"There is no need to rush," he said. "This is our advice to the entire world. We should act together with the international community."

South Korea said on Tuesday that it is willing to work with a new Afghanistan government led by the Taliban if it follows "international convention, respects basic human rights and refuses to provide refuge for terrorism". China Daily Global | Updated

Agencies and Heng Weili in New York contributed to this story.