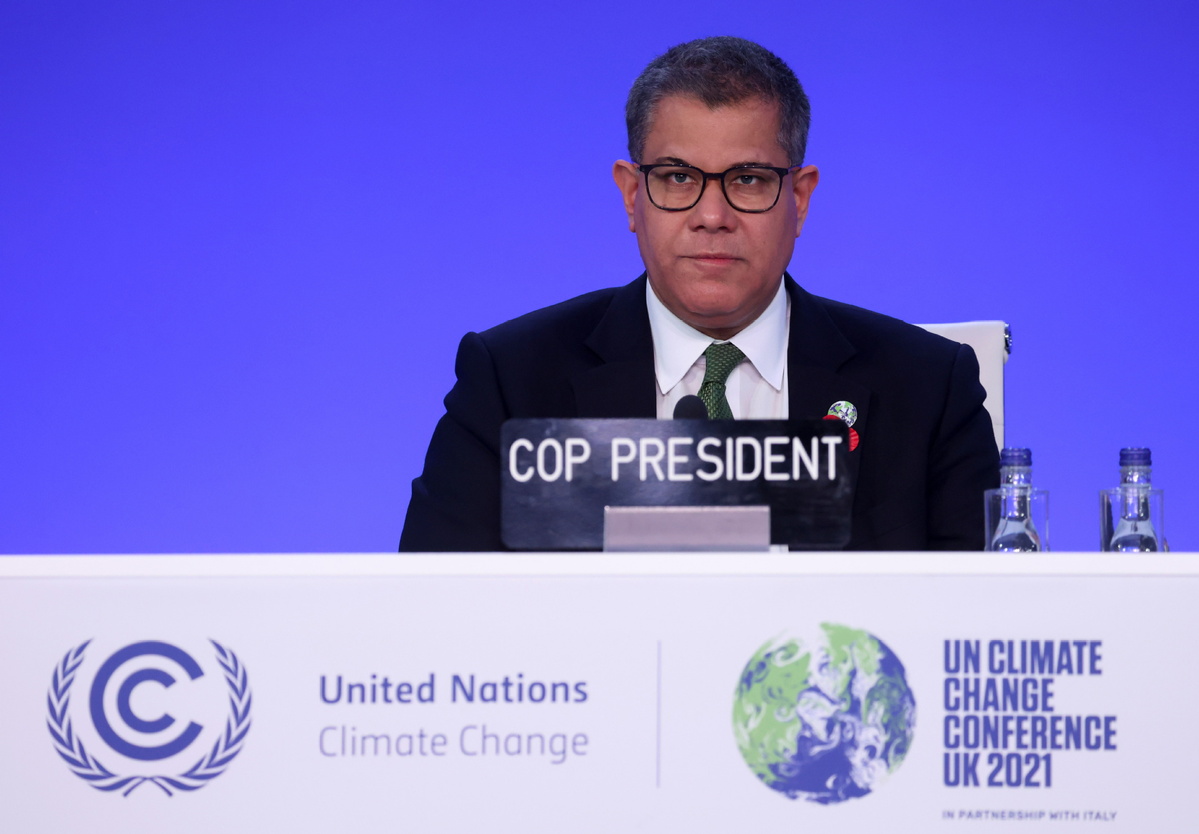 COP26 President Alok Sharma issued delegates with a call to action on the penultimate day of the 26th United Nations Climate Change Conference of the Parties in Glasgow on Thursday, saying much work needs to be done to achieve a consensus on climate goals.

Negotiators have hammered out multilateral plans on global warming since Nov 1 in the Scottish city, and the conference is due to end on Friday, though previous iterations have run over.

COP26 has delivered some notable deals on deforestation, fossil fuel subsidies, coal and methane reduction, and engagement with the private and finance sectors. And on Wednesday, China and the United States surprised the conference with a joint declaration on climate change, which was roundly welcomed by onlookers.

Simon Bradshaw, head of research at the Australia-based Climate Council, called the declaration "a big deal".

"One of the big fears going into Glasgow is that China and the US would be at loggerheads, but in fact what this statement says is they will collaborate, despite their differences," Bradshaw said.

But Sharma said "another gear shift" is needed to bring COP26 over the line, and voiced concern that there was still divergence over elements within working texts for the so-called Glasgow Agreement, a draft of which was issued midweek.

"I'm under no illusion that any party in this room is wholly satisfied with where the texts currently stand," Sharma said. "We are not there yet, there's still a lot more work to be done."

A new draft is expected on Thursday night. When finalized, the text will include commitments and measures aimed at limiting the rise in average global temperate and accelerating the transition to net-zero emissions.

Sharma highlighted key unresolved areas, including climate adaptation, transparency, and finance, as well as the completion of Article 6 of the Paris Agreement, which concerns carbon markets and other cross-border mechanisms.

The failure last year of rich nations to honor a commitment to provide $100 billion in annual climate finance to developing countries-a goal that was missed by $20 billion-remains a contentious issue.

The draft text also called for acceleration in phasing out coal and fossil fuel subsidies this decade, a clause absent from previous COP agreements.

A block of 24 nations, including China, called the Like-Minded Group of Developing Countries, or the LMDC, said the addition unfairly shifted responsibility to poor nations from rich ones, at a time when climate finance commitments remain unfulfilled.

"Under the Paris Agreement finance is an obligation, finance is not a charity to developing countries from the developed world," Bolivian negotiator Diego Pacheco Balanza said, speaking on behalf of the LMDC.

Thursday saw a number of fresh partnerships and announcements in Glasgow. The UK launched an Urban Climate Action Program that, backed with $36.8 million in funding, will help the net-zero transition in cities in Africa, Asia, and Latin America. And 11 nations and regions signed on to a Denmark and Costa Rica-led alliance aimed at phasing out the production of oil and gas. By ANGUS McNEICE in Glasgow | China Daily Global |