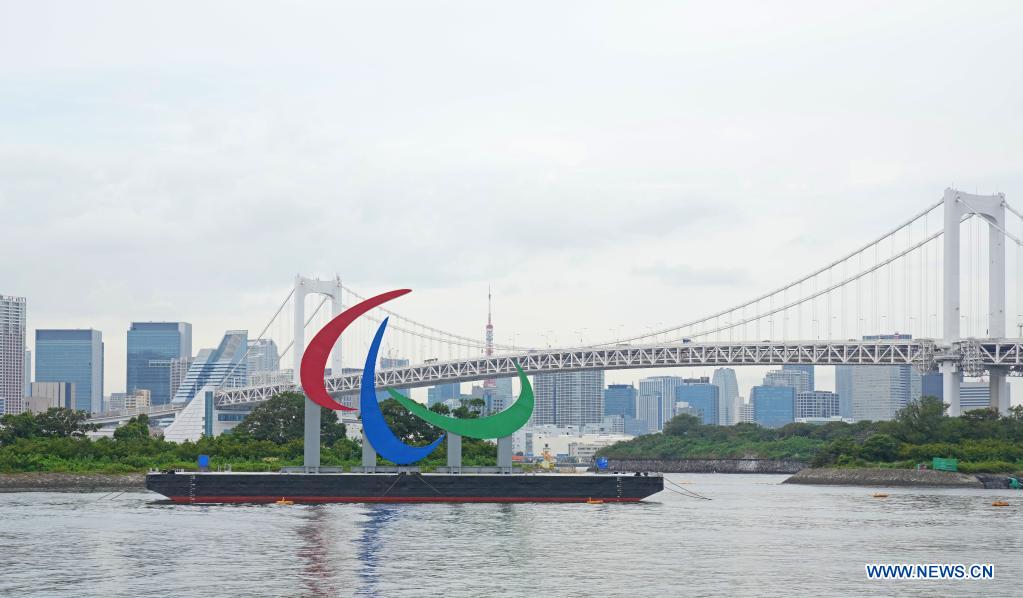 Photo taken on Aug 23, 2021 shows the Paralympic Games symbol of "Three Agitos" in the Tokyo Bay area in Tokyo, Japan. The Tokyo Paralympic Games will open on August 24 and close on September 5. [Photo/Xinhua]

Team China has vowed to continue its dominance at the Tokyo 2020 Paralympic Games as Zhou Jiamin and Wang Hao were named as the flag bearers for Tuesday's opening ceremony.

"The Chinese delegation will spare nothing to deliver a satisfactory result in the upcoming Paralympics," said Zhang Haidi, chef de mission for China at the Games.

Zhang, who is also chairwoman of the China Disabled Persons' Federation, made the remark during a webinar on Monday.

"The postponement (of the Paralympics) and the pandemic have inevitably affected our athletes' training and mental states, but we will leave no stone unturned in our quest to strive for excellence," Zhang said. "In order to do that, the Chinese delegation will overcome any difficulty that lies in front of us."

Chinese Ambassador to Japan Kong Xuanyou said he looked forward to the "tenacious fight" of Chinese athletes and the embassy will make every effort to serve and help the delegation.

"I hope that the confidence and persistence of Chinese people with disabilities can be shown at the Paralympics, and I sincerely wish you a safe and successful completion of all competitions," Kong said.

The opening ceremony of the Paralympics will be held on Tuesday at the Olympic Stadium in Tokyo, the same venue for the opening and closing ceremonies of the Tokyo 2020 Summer Olympic Games.

China has sent 251 Paralympians－132 women and 119 men－to compete in 20 of the 22 sports in Tokyo. Team China will take part in taekwondo and badminton, the two new sports added to the Paralympics.

Zhou, who claimed the women's composite bow open-individual and mixed doubles titles at the 2016 Rio Paralympics, and long jumper Wang will be Team China's flag bearers at the opening ceremony.

China has topped the medal table at every Paralympics since Athens 2004 and many sporting pundits are asking whether the country can make it five in a row.

The youngest member of Team China, 16-year-old swimmer Jiang Yuyan, is aware of the sporting legacy they have to maintain.

"Everyone on the Chinese team, all of my elder brothers and elder sisters, are all incredible," said the swimmer. "As someone from the new generation, I feel like I have to work as hard as I can so that I can follow in their footsteps and take over their mantle."

The Hong Kong Special Administrative Region is sending 24 athletes to the Paralympics, and Chinese Taipei is sending 38 athletes. By WANG XU in Tokyo | China Daily | Updated: 2021-08-24