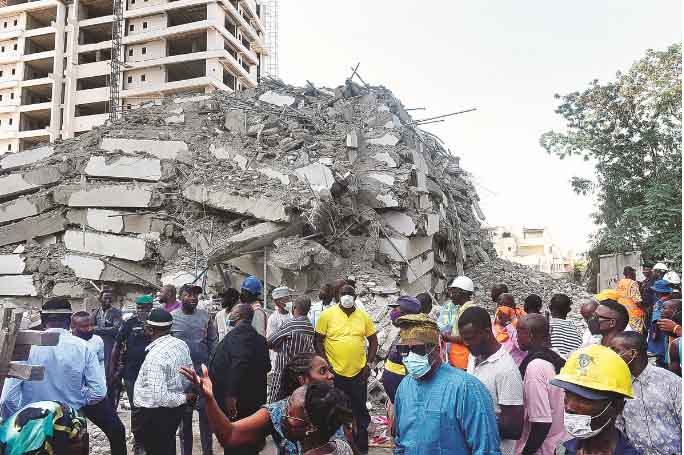 LAGOS - The death toll from the collapse of a 21-story building in the city of Lagos, Nigeria's economic hub, on Monday rose to 20, as more dead bodies have been recovered, with scores of people remaining unaccounted for, an emergency management official said.

Ibrahim Farinloye, the coordinator of the National Emergency Management Agency (NEMA) in the Lagos state, said in an update statement on Tuesday evening that 20 dead bodies had been recovered and nine people had been rescued alive following the collapse of the 21-story building under construction in the Ikoyi area of Lagos city Monday afternoon.

Farinloye said rescue operations were still underway and an investigation into the cause of the collapse is ongoing.

Residents living in the area told Xinhua earlier Tuesday that the building had been under construction for more than one year and over 50 people, mostly construction workers, were trapped under the rubble.

Earlier on Tuesday, the governor of the Lagos state, Babajide Sanwo-Olu, vowed in a statement a thorough investigation into the deadly building collapse, adding the state government is setting up an independent panel to probe the cause of the collapse.

Sanwo-Olu said members of the panel will be drawn from professional bodies in the field of construction such as the Nigeria Institute of Architects, the Nigerian Institute of Town Planners, and the Nigeria Society of Engineers.

"It will independently investigate the remote and immediate causes of the incident and make recommendations on how to prevent future occurrences. The investigation is not part of the internal probe already being conducted by the government," he said.

The governor said the government will find out what went wrong and punish those indicted, adding that as a first step, he has directed that the general manager of the Lagos State Building Control Agency be suspended from work immediately.

Meanwhile, Nigerian President Muhammadu Buhari directed authorities in the Lagos state to step up rescue efforts in a statement issued on Tuesday.

"I commiserate with all the families who have lost loved ones in the collapsed building in Lagos. This is a sad period for the people and government of Lagos state, and we share in the sadness," Buhari said.

The Nigerian leader also called on emergency institutions, including hospitals, to provide all the support to safeguard the lives of the rescued.

Building collapses often occur in Nigeria, as some property owners and developers do not adhere strictly to planning and building laws and regulations. In most cases, heavy loads are placed on the building and substandard materials are used in construction.

Preview：Europe once again COVID-19 epicenter: WHO