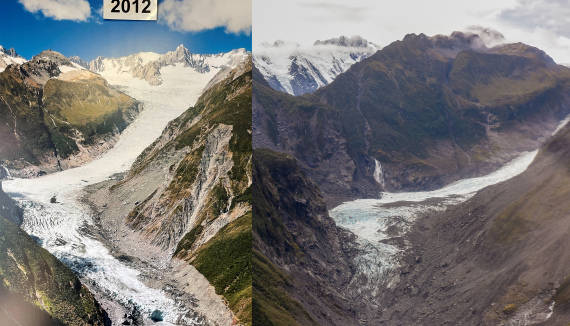 A full view of Fox Glacier in New Zealand in 2012 (left) and Fox Glacier (right) taken from the aerial on April 19, 2021 (Photo by Xinhua News Agency reporter Guo Lei)

Chao Qingchen, deputy director of the National Climate Center, said on August 18 that it is expected that by the middle of the 21st century, the warming of the climate system will continue, and the concurrent probability of extreme weather and climate events in many regions of the world will increase.

At the Intergovernmental Panel on Climate Change (IPCC) sixth assessment report working group report media interview meeting held on the same day, Chao Qingchen said that the 50 years since 1970 are the warmest 50 years since 2000. year. From 2011 to 2020, the global surface temperature has risen by 1.09 degrees Celsius compared with the period of the industrial revolution, of which the increase of about 1.07 degrees Celsius is caused by human activities.

Research shows that the global temperature rise will reach or exceed 1.5 degrees Celsius in the next 20 years. "The impact of global warming on the entire climate system is unprecedented in the past centuries or even thousands of years." Chao Qingchen said, "Many climate system changes caused by past and future greenhouse gas emissions, especially oceans, ice caps and Changes in global sea levels and other changes are irreversible on the scale of centuries to millennia."

Experts say that the probability of concurrent extreme weather and climate events in many regions of the world will increase. Such as the concurrent high temperature heat wave and drought, extreme sea level events characterized by storm surges, huge ocean waves and tidal floods, and compound flood events caused by superimposed heavy precipitation intensified, etc.