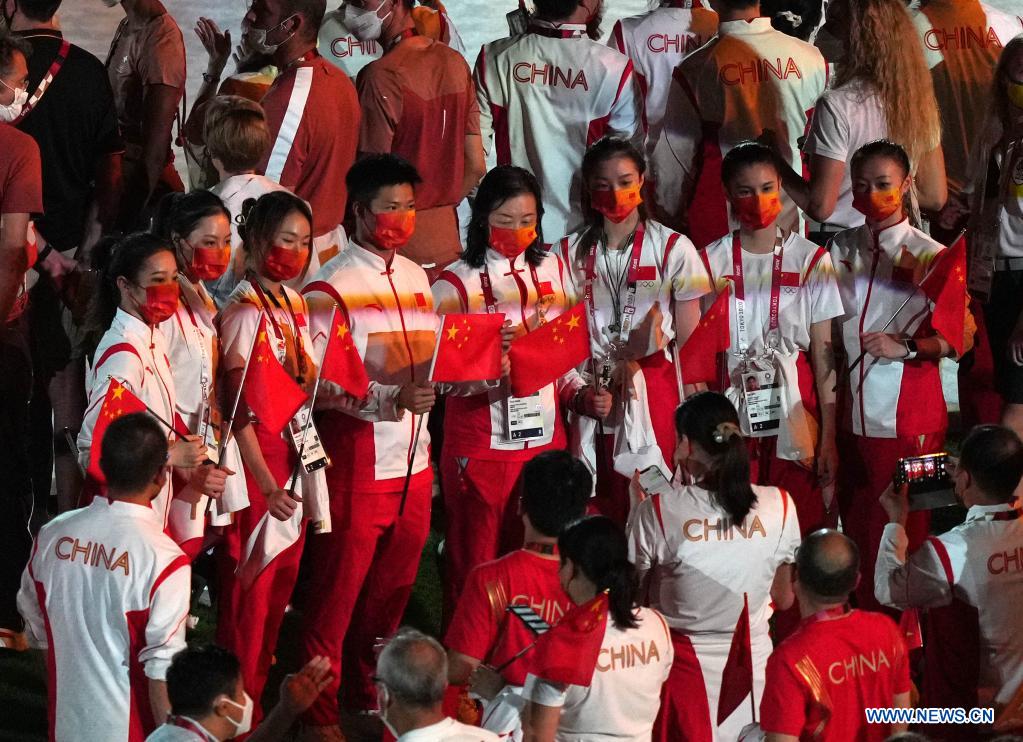 Members of the Chinese Olympic delegation are seen during the closing ceremony of Tokyo 2020 Olympic Games in Tokyo, Japan, Aug 8, 2021. [Photo/Xinhua]

TOKYO - Chinese athletes had received 226 doping tests as of August 6 at Tokyo 2020, and there was no single case of doping, a spokesperson from the Chinese sports delegation said here on Sunday.

The spokesperson stated that Team China fulfilled its goal to play clean and take clean medals at Tokyo.

China dispatched a 777-member delegation to Tokyo, its largest ever for an overseas Games. The 431 Chinese athletes, including 24 Olympic champions, competed in 30 out of 33 sports in Tokyo.

As the Games wrapped up on Sunday, China ranked second in the medal count behind the United States with 38 golds, 32 silvers and 18 bronze medals.

China also equaled the best overseas Games record in terms of gold medals as they had at London 2012.

"Frankly speaking, we succeeded both in sport and in moral excellence," said the spokesperson, adding that Team China battled against the impact of the postponement of the Games due to COVID-19.

China also made progress in swimming and athletics, with three golds from swimming, and another two from shot put and javelin.

Su Bingtian became the first Chinese sprinter to race in the Olympic men's 100m final after clocking a personal best of 9.83 seconds.

During the Games, China shattered four world records in events like the women's 4x200m freestyle relay, and set 21 Olympic records.

The United States, along with China, Japan, Britain, the Russian Olympic Committee and Australia, remain at the top of medal count. Although the United States faced challenges in track & field and swimming, they won a total of 113 medals and displayed their overall competitiveness.

"Team China will stick to effective practices and reform measures in the past five years to promote overall competitiveness of Chinese sports," the spokesperson said, adding that the Tokyo Olympic Games' success has made significant contributions to the Olympic movement worldwide.

"The Japanese government and the organizing committee of the Tokyo Olympics have invested a lot of resources in hosting the Games. We should thank them, and we sincerely welcome you to Beijing Winter Olympics," said the spokesperson. Xinhua | Updated: 2021-08-08