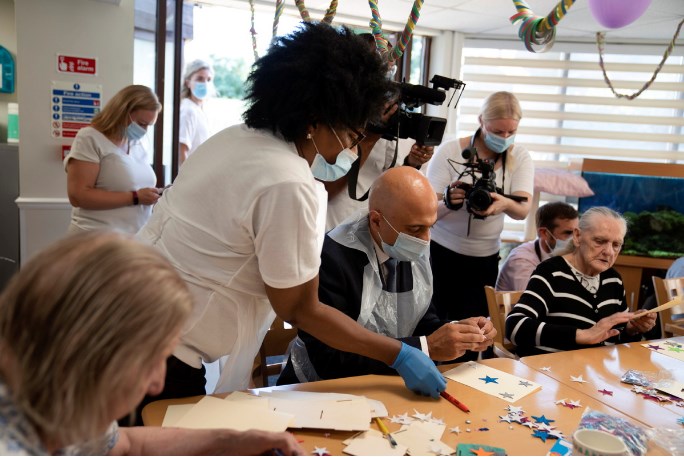 Lawmakers in the United Kingdom on Wednesday voted on whether to raise National Insurance payments to fund health and social care, the day after the prime minister announced the nation's biggest tax rise in decades.

Boris Johnson proposed that contributions will rise by 1.25 percentage points in a bid to end the "unpredictable and catastrophic costs" faced by many.

The decision by the government effectively abandons its key 2019 election manifesto pledges on tax hikes and pensions.

The increase is expected to raise about 12 billion pounds ($16.5 billion) a year, which the government said will first be used to fund dealing with National Health Service, or NHS, waiting lists for appointments, scans and operations, caused by the COVID-19 pandemic.

It will also be used to upgrade social care, which helps older and working-age people with high care needs to carry out daily tasks, with the proposals including a cap on lifetime care costs of 86,000 pounds, from October 2023.

The levy will be paid from April next year by working adults including those over the state pension age, and employers, and affects the whole of the UK.

The plan, signed off by the Cabinet on Tuesday, has received heavy criticism, with the UK Home Care Association, which represents home care providers, quoted by the BBC as saying it was "nowhere near enough" and trade union Unison, whose members include some in the care sector, said the money "doesn't even come close".

The Institute for Fiscal Studies (IFS) warned in a Twitter post that the money raised risks being swallowed up by the NHS and will leave little for social care.

Leader of the opposition Labour Party, Keir Starmer, said in Parliament that the plans were unfair on working people and that the rises were "regressive".

Economists and business leaders warned that the tax hikes risk damaging the City of London, deterring investors as Britain battles its way out of the COVID-19 pandemic crisis and adjusts to life after Brexit, The Daily Telegraph reported.

Karan Bilimora, president of the Confederation of British Industry, said the proposed taxes on dividend income would impede investment, which "plays a critical role in supporting businesses and enabling growth across the whole economy".

Chris Sanger, head of tax at big four accounting company Ernst &Young, told the Telegraph the levy punishes businesses that are looking to grow the economy.

He said: "You're effectively now increasing the cost of owning shares, and that will go well beyond people who are actually earning money to those that are actually investing and providing the capital which is the lifeblood of industry."

Small businesses, which face the added headache of the government's furlough job retention program coming to an end next month, have warned the move could damage recruitment and entrepreneurialism, The Times reported.

Suren Thiru, head of economics at the British Chambers of Commerce, told The Times the increase "will be a drag anchor on jobs growth at an absolutely crucial time", with businesses carrying "huge debt burdens".

Quoted in the same publication, IFS Director Paul Johnson described the size of the tax and spending announcement as "a budget in all but name".

The Treasury's official budget is due to be held alongside a three-year spending review on Oct 27.