Tens of thousands of anti blockade protests broke out in Austria: no masks, kissing and hugging

According to Reuters and Russia today (RT), about 10000 people marched through the center of the Austrian capital Vienna on the 16th local time to protest against the blockade imposed by the government to stop the spread of the epidemic, and demanded the resignation of prime minister Kurtz. 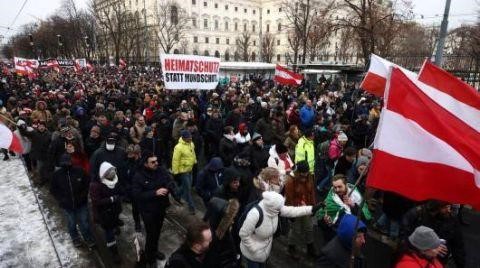 The report said the marchers ignored the call for social distance, and many did not wear masks. The video shows people kissing, hugging and dancing with each other. In addition, they are holding demonstration slogans including "Kurtz must step down".

According to reports, Austria, a country with a population of 8.9 million, is currently in the third phase of the epidemic, allowing only stores that supply necessities to open. Austrian public health experts said after a recent meeting with government officials that the local new crown infection rate is too high to consider relaxing the blockade at this time. The Austrian government is therefore scheduled to announce its next steps to prevent and control the epidemic on Sunday.

Novel coronavirus pneumonia data from covid-19 Johns Hopkins University show that as of 6:30 am, Beijing time, 17 cases of new crown pneumonia were reported in Austria, and 392511 cases were dead, and 7053 cases died.

Preview：U.S. Department of Commerce: U.S. GDP in 2020 is the largest decline in 74 years