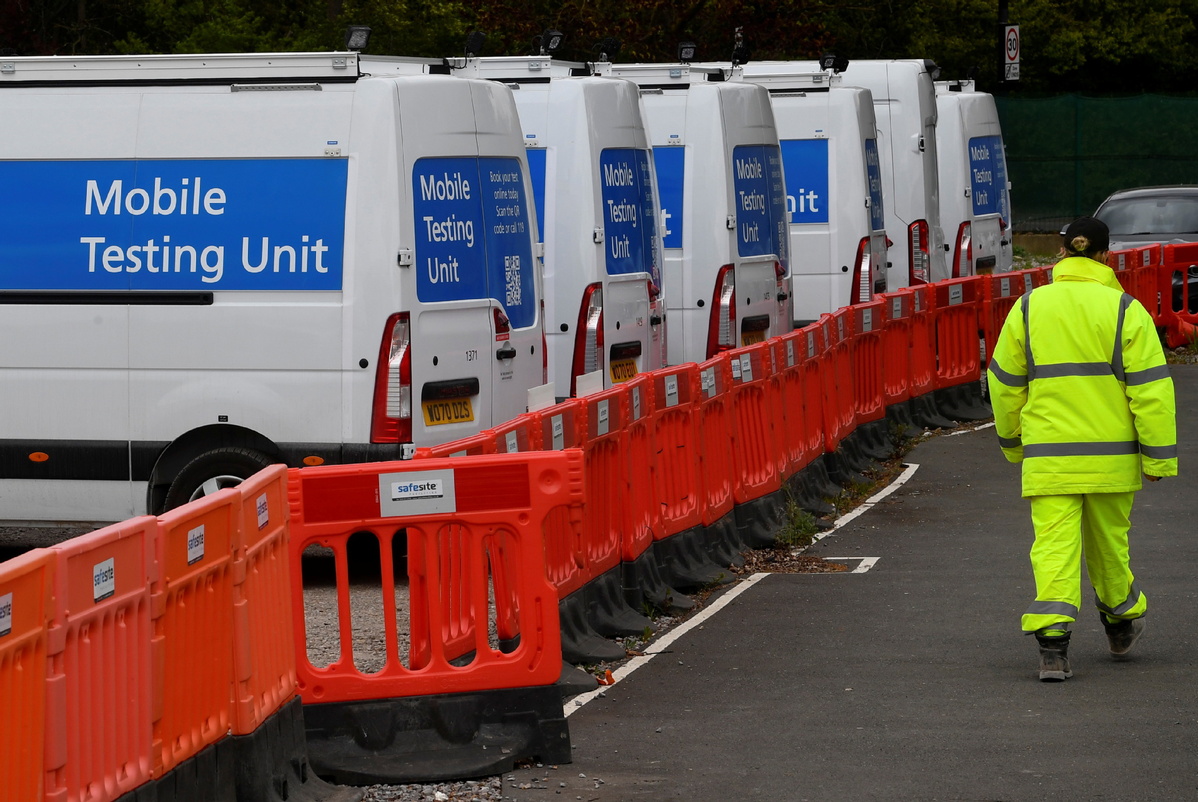 A worker walks past coronavirus disease (COVID-19) mobile testing vehicles parked at a depot in London, Britain, May 3, 2021. [Photo/Agencies]

A survey released to coincide with UK Mental Health Week has revealed the unseen toll of the novel coronavirus pandemic on the United Kingdom business sector, with four out of five owners of small businesses saying their mental health had been negatively impacted by events of the last year.

Commonly-mentioned symptoms include depression, stress, increased levels of anxiety and trouble sleeping. Overall, 82 percent of respondents said they had experienced mental health issues during the lockdowns and restricted trading opportunities of the last year.

"Few have been hit harder by the effects of the pandemic than the self-employed," said Alan Thomas, UK CEO at Simply Business, which commissioned the research.

"Livelihoods are on the line as a result of COVID-19, with small business owners facing an unprecedented amount of pressure. Clearly, this has had a huge impact on their well-being－the scale of which can be seen in the results of this study."

The small business sector is a huge contributor to the British economy, with around 6 million small enterprises contributing 33 percent of all employment and 21 percent of all economic turnover, according to figures from Business Matters magazine, so the economic and actual health of the sector is of great significance.

Last August, figures released by the Office for National Statistics showed that in June 2020, during the early stages of lockdown, around one in five adults had experienced either moderate or severe depressive symptoms, which was a doubling of figures from before the pandemic, but the economic climate has meant that small businesses have felt the strain in an even more extreme way.

The latest survey revealed that one-third of small business owners had been forced to shut up shop completely at some point during the pandemic, and more than two-fifths were only able to operate at reduced capacity. Only one in five self-employed people has managed to continue working as normal.

The theme of UK Mental Health Week 2021 is nature, because studies have shown people have turned to it to help deal with the stress of the pandemic.

"Our research … showed going for walks outside was one of our top coping strategies and 45 percent of us reported being in green spaces had been vital for our mental health," said Mark Rowland, chief executive of the Mental Health Foundation.

"Websites which showed footage from webcams of wildlife saw hits increase by over 2,000 percent. Wider studies also found that during lockdowns, people not only spent more time in nature but were noticing it more."

Despite the troubled times of the last year, overall, the outlook for the small business sector seems quite positive, with two in five survey respondents saying they were optimistic about an economic revival, and more than one-third being hopeful about their business\'s future. By JULIAN SHEA in London | China Daily Global |