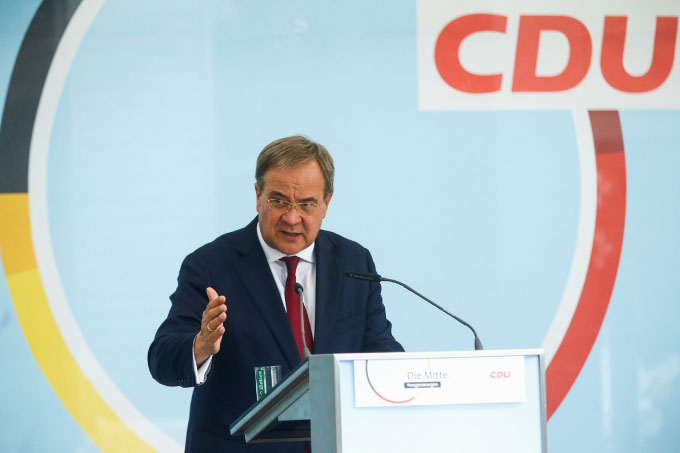 Germany could be headed for a three-way coalition government led by the center-left Social Democrats, according to unexpected results from the latest opinion poll of voting intentions for next month's election.

The federal vote on Sept 26 will determine the successor to Chancellor Angela Merkel, after her 16 years at the helm, and will bring a new political era in Europe's biggest economy.

Armin Laschet, the candidate to replace Merkel picked by her own center-right Christian Democrat Union, or CDU, was recently the frontrunner in the race but is now under pressure as the party's approval ratings have dropped, Reuters reported.

The CDU's coalition partner in the outgoing government, the center-left Social Democrats, or SPD, has been slowly gaining ground it lost in the 2017 election, and has now edged ahead for the first time in 15 years.

It suggests the possibility that the CDU could suffer its worst electoral result in 70 years, and that a new left-leaning coalition could exclude the party entirely.

Polling group Forsa noted a 10 percentage point drop in CDU ratings since the last election. Its latest survey, published on Tuesday, has the SPD on 23 percent and the CDU on 22 percent.

"What's most striking here is the weakness of the CDU, rather than the relative success of the SPD," said Peter Matuschek, chief political analyst at Forsa, as quoted by the Financial Times.

"When you look at the numbers, 23 percent for SPD would not have been a great result in previous elections."

The Greens are in third place and could "more than double" their share of the vote from the last election, the paper said. There is also a resurgence of support for the pro-business liberal Free Democrats, or FDP, it noted.

Merkel has played down her party's downturn in approval ratings.

"We will work every day for a good result and we are not looking at polls every day," she said on Tuesday.

Laschet, who faced criticism after being caught on camera laughing during a visit to areas devastated by flooding last month, warned on Tuesday that the Greens and SPD were threatening "social peace" with their focus on climate change policies ahead of jobs.

Current finance minister, Olaf Scholz, leader of the SPD, is a popular choice for chancellor, although Germany does not vote for the leader directly.

A recent poll by ARD/Deutschlandtrend found that 35 percent wanted him to succeed Merkel, while just 20 percent backed Laschet and 16 percent favor Annalena Baerbock of the Greens.

The Financial Times said Scholz's challenge is "how to translate his high personal ratings into improved polling for his party".

Next：TSMC chip prices will rise 20% across the board