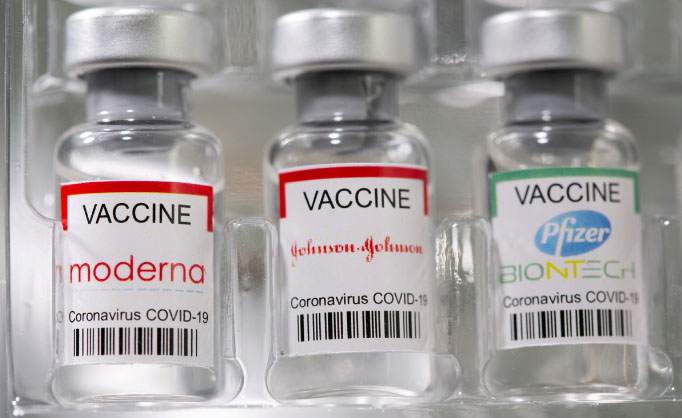 The US Food and Drug Administration (FDA) on Wednesday authorized COVID-19 vaccine booster shots from Moderna and Johnson & Johnson and also said that Americans can take a booster different from their initial inoculations.

"The availability of these authorized boosters is important for continued protection against COVID-19 disease," Acting FDA Commissioner Janet Woodcock said in a statement.

But first the centers for Disease Control and Prevention (CDC) will consult with a panel of experts Thursday before finalizing official recommendations for who should get boosters and when.

The FDA had previously authorized boosters of the Pfizer vaccine developed with German partner BioNTech SE at least six months after the first round of shots, to increase protection for people age 65 and older, those at risk of severe disease and those who are exposed to the virus through their jobs.

Also, children in the US ages 5 to 11 will soon be able get a COVID-19 shot if the Pfizer-BioNTech vaccine for that age group is authorized by the FDA and recommended by the CDC, the White House said Wednesday.

White House officials said they have secured enough doses for roughly 28 million children in that age group and will provide smaller needles to make it easier to inject young children.

Federal regulators will meet over the next two weeks to weigh the safety and effectiveness of giving low-dose shots to them.

"We're completing the operational planning to ensure vaccinations for kids ages 5 to 11 are available, easy and convenient," White House COVID-19 coordinator Jeff Zients said in a briefing Wednesday. "We're going to be ready, pending the FDA and CDC decision."

Once authorized, the White House said it will quickly distribute the shots to more than 25,000 pediatrician's offices and primary care sites, as well as hospitals, pharmacies and community health centers.

The administration also will roll out a national public education campaign to inform parents and guardians about the vaccine and solicit questions.

Meanwhile, New York City Mayor Bill de Blasio announced on Wednesday that all public employees must get vaccinated against COVID-19 with no test-out option.

"Our public employees are going to lead us out of the COVID era," he told MSNBC.

The order will affect more than 160,000 workers, including police, firefighters and correctional officers, 71 percent of whom are partially or fully vaccinated, according to official estimates.

Some 46,000 city workers still need to get their first shot by Oct 29 or potentially lose their jobs. The city's roughly 8,000 correction officers will face a later deadline of Dec 1.

The city already requires vaccines for education and public healthcare workers. Among the 167,000 employees of the city's school system, 96 percent have complied, The Wall Street Journal reported.

Any city worker who doesn't get at least one shot by the deadline will be placed on unpaid leave. Medical and religious exemptions will be allowed "for a small number of employees", a city official said.

New York City is one of the first major cities to require all of its workers to get vaccinated without a testing option. San Francisco set a similar vaccine mandate for its 35,000 city workers as of Nov 1.

"From the beginning of the de Blasio administration's haphazard vaccine rollout, we have fought to make the vaccine available to every member who chooses it, while also protecting their right to make that personal medical decision in consultation with their own doctor," New York City Police Benevolent Association President Patrick Lynch said in a statement Wednesday. "Now that the city has moved to unilaterally impose a mandate, we will proceed with legal action to protect our members' rights."

The US Supreme Court on Tuesday declined to block a vaccine mandate for health workers in Maine. It was the first time the court weighed in on a statewide vaccine mandate. It has rejected similar requests to halt vaccine requirements for New York City teachers and Indiana University staff and students.

The Maine vaccine requirement that was put in place by Democratic Governor Janet Mills requires hospital and nursing home workers to get vaccinated or risk losing their jobs. The state will begin enforcing it Oct 29.

Preview：Kuwait's airport to operate at full capacity from Sunday