2020 - The worst year ever commented by Time magazine

Time magazine painted "red X" for "2020", which only appeared four times in history.

Recently, Time magazine published the cover of its latest issue. On the cover, 2020 with black characters on a white background is painted with a "red X" and the postscript "this is the worst year".

This year is not as gruesome as the fictional end of the world," it wrote. In addition to suffering, life is maddeningly monotonous, and every day is against us. "

"This year, we are threatened by the most devastating sense of helplessness, which spreads out of control."

The U.S. government has become the center of at least three clustered outbreaks.

The outgoing trump administration plans to hold more than a dozen group gatherings against the backdrop of the still severe epidemic in the United States, CNN\'s chief medical reporter Sanjay Gupta said on Sunday. The move ignored not only the CDC\'s restrictions on the size of gatherings, but also the restrictions on indoor gatherings in Washington, D.C. It is understood that the U.S. government has become the center of at least three clustering outbreaks.

On the same day, Scott Gottlieb, former director of the U.S. Food and drug administration, said the U.S. epidemic will worsen in the next four to six weeks, with the number of inpatients and deaths peaking in January next year. It is expected that by January next year, the number of new deaths in the United States could reach nearly 4000 a day.

Health care and funeral workers in the United States: exhausted but "the worst is yet to come"

This winter will be one of the darkest moments in the history of public health in the United States, disease control experts have warned the public. American medical staff, funeral industry, etc. have said that it is now a devastating season. Despite the fact that novel coronavirus pneumonia has been struggling for months, they are worried that the worst is yet to come. 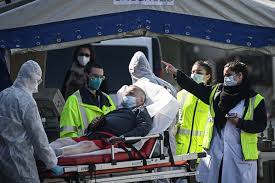 Also on the brink of overdraft is the funeral industry. Sheila Kruger, executive partner of a California funeral home, says her business tripled during the outbreak. The funeral of novel coronavirus pneumonia has been booked up for the next four to five weeks, and the number of people who died of new crown pneumonia is higher.

This summer, Kruger\'s employees were overwhelmed, handling 135 deaths in a month, compared with an average of 55. Since the outbreak, her staff has doubled and she has bought three cold storage rooms to store her remains, but now they are full.